For The Love of the Game

Excerpted from Thomasville Magazine, Fall 2012.  To read the article in its entirety, click here. 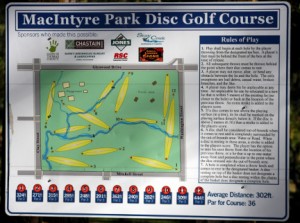 One of the world’s fastest growing sports can now be found right here in Thomasville at our very own MacIntyre Park: Disc Golf. “What is Disc Golf?” you may ask. The easiest way to explain it is to compare it to regular ball golf, but instead of using clubs to hit a ball, disc golfers throw discs to navigate the course. The manner in which the holes are completed also slightly differs between the two. In Disc Golf the player attempts to “hole out” by ringing a pole-mounted basket with chains hanging above it. The chains can be used as a sort of backstop to halt the flight of the disc and make it drop into the basket below. The overall goal is to get the disc in the basket in the fewest number of throws or “strokes”, just like its ball golf cousin. Rob Taylor, a local disc golfer and committee member for Red Hill Disc Golf says, “It is easy to learn, a healthy activity, and accessible to people of all ages and fitness levels.” 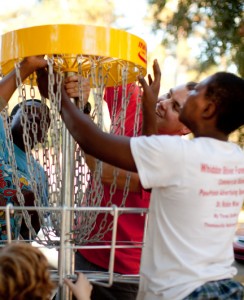 The sport really got a boost locally when Hands on Thomas County (HOTC) and the City of Thomasville pulled together volunteers from the community to build and install the course in October of 2010. “Having a course in our home town only grew our love for the sport” says Taylor. With the continued growth of the sport and local support from avid disc golfers, a bag tag league was started. The participants in the bag tag league get a numbered tag that is used as a trophy of sorts when they play against one another. Challenges are issued by players with higher number tags to those with lower number tags with the hope of shooting a lower score that round and ending up with the lower tag. This bag tag league was created to encourage players to play together, add an additional competitive element with the goal of attaining that coveted #1 tag, and also to encourage players to learn and obey the rules of the game. Jim Henderson, a committee member for Red Hills Disc Golf and administrator of the bag tag league, thinks “playing for bag tags is a great incentive to meet up with the other participants in the league and can make each round a little more fun and competitive”. 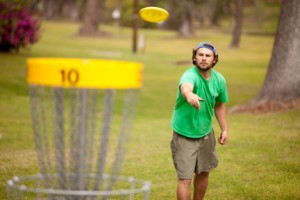 Out of the bag tag league, Red Hills Disc Golf was born. This local disc golf club adopted the mission to be “dedicated to the promotion and growth of disc golf in the greater Thomasville, GA area by encouraging new players to get involved in organized disc golf, helping Hands on Thomas County develop and maintain all Thomas County disc golf courses, promoting organized disc golf events, and striving to instill community awareness of the great sport of disc golf while fostering a spirit of competition.” In an effort to thank Hands on Thomas County and the City of Thomasville for the installment of the course, Red Hills Disc Golf hosted their first tournament, dubbed the “Mac Attack” in March 2011. An amazing group of 40 players showed up for that first event and they were able to raise $1000 for the nonprofit organization. Due to its overwhelming success, the decision was made to hold a second tournament in December of 2011 and call it the “Jingle Jangle”. This tournament built on the success of the first by featuring 44 players and raising nearly $1400 for Hands on Thomas County. 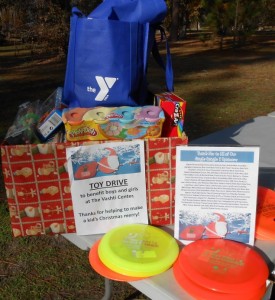 Since then, 2 more tournaments have been held, MacAttack 2 and Jingle Jangle 2. Each growing in participation, reach and excitement; and nearly tripling the proceeds from past tournaments which benefit Hands On Thomas County’s volunteer and community service programs.  The tournaments have also begun including a player collection drive.  Participants of Jingle Jangle 2 in December 2012 donated new toys for the kids at Vashti just in time for Christmas.

On May 18, 2013, HOTC and Red Hills Disc Golf will host MacAttack 3 which will be their first Professional Disc Golf Association (PDGA) sanctioned C-Tier event.  Proceeds will benefit HOTC, and there will be a collection drive of new and gently used discs to be donated to HOTC Youth Disc Golf programs that will encourage local schools, youth groups and individuals to get active in this up and coming sport. Click here for event information and registration. For tournament sponsorship opportunities, click here. 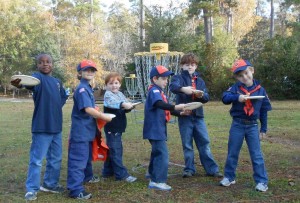 or Rec Division, is for the more casual disc golfer, or maybe someone who is just getting into the sport. It’s great to see this area’s biggest names in disc golf show up for our tournament, but I’m most excited about the large number of Rec players. We see new players, a few guys in their seventies, and a handful of junior players all the way down to age 12.”

Red Hills Disc Golf has a toss, or informal non-tournament round, every Sunday afternoon at 2:00 and would like everyone to know that it is open to ALL players regardless of skill level or club membership. The last Sunday of each month the format of the toss is Doubles where randomly drawn teams of two play the course together only using the best throw made by either player on each shot. They also would like to extend an open invitation to the community to come

out to MacIntyre Park and give this fast-growing sport a try. They are convinced it will be a sport you will fall in love with as they have. Members can offer demonstration and instruction on different throwing styles and techniques, explanation of the different types of discs and flight patterns, and even let you throw some of the different discs to see which suits you best. “Most of us just went and bought discs and started throwing them” said Thornhill. “I personally would’ve loved the advice and instruction from an experienced player when I first started out”.

To get in contact with Red Hills Disc Golf, email tvillediscgolf@gmail.com or find “Red Hills Disc Golf” on Facebook. For more information on disc golf including statistics on its recent growth, visit the Professional Disc Golf Association website.

Who’s Your Hands On Hero?